Home » Coding » Atom vs Pycharm: Everything You Need to Know

Atom vs Pycharm: Everything You Need to Know 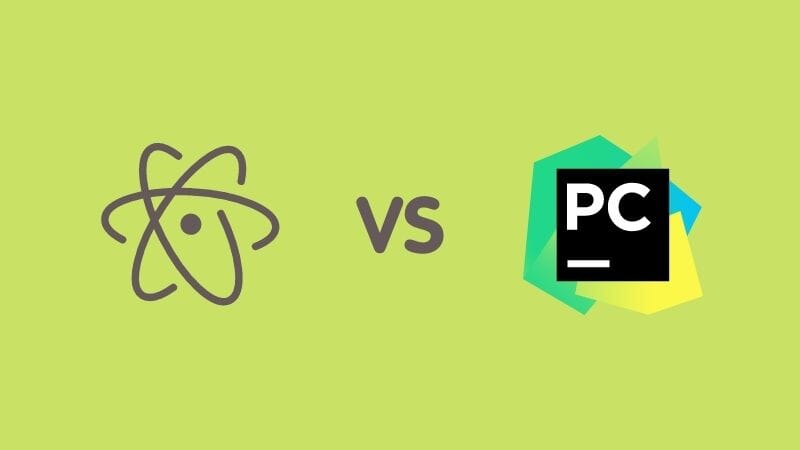 In this article, I would like to discuss the differences between Atom and Pycharm. If you are a new programmer and you are thinking about choosing which source code editor to use for coding python. Then this article will help you if you wonder which of these two editors is better for you. So let’s begin to compare Atom vs. Pycharm.

Atom is a free editor which is fully open source and is developed by GitHub. It is available on Mac OS, Linux, and Windows. That comes with tons of plugins that are written in JavaScript. As developers call it a “hackable text editor for the 21st century”. Additionally, you can fully customize it with HTML, CSS, and JavaScript.

It is an integrated development environment IDE and specially built for Python language. It was developed by the Czech company JetBrains. It comes for or Windows, Linux, and Mac OS.

There are two editions; one is the community edition which is free to use. The Other version is the Professional edition for which you have to pay to use, and there is a trial version as well.

Difference Between Pycharm and atom

Both editors require the same type of setup pretty much. No need for any advanced requirements; follow the python documentation. And download python on your PC or Mac. You can add some python extensions and plugins in Atom.

If you are new to programming, it might take some time to learn about these editors. Still, you can start using Atom right away. Pycharm has lots of features, so you might need some time to know about the IDE in depth.

Atom is entirely free, and you don’t have to pay anything to use it. But Pycharm, on the other hand, does not have all the features in the free version. You have to pay extra for those additional features.

Verdict: What to choose Atom vs Pycharm?

Pycharm was voted the most used IDE for Python programming.  According to the Python developer survey of 2020.  And very few voted for atom.  That means developers prefer Pycharm over Atom for development.

When comparing both of these applications, you must remember one of the measure text editors, and the other is an IDE. Developed for different purposes, so when it comes to which is better than the other.

Then the answer will be both of them are good in their own right. But if you are a python programmer, Pycharm will be more beneficial for you because Pycharm was built for programming python. So IDE will always be better than editors.

On the other hand, Atom is like an advanced general-purpose programming language editor for any language such as C, C++, Java, JavaScript, HTML, CSS, etc. Which does not mean you cannot use an atom for python. But you get more features in Pycharm. But I would not recommend IDE for beginners for any language.

It would be best if you used an editor like Atom to learn any language. Once you are a little advanced, then you can migrate into Pycharm. IDE is a little complex than editors.

I hope you like this article about Atom vs. Pycharm. Both of these are good editors. And they are trendy nowadays. It’s all about preference which one you like the most. One crucial factor to consider here is that if you need an editor for multiple languages, Pycharm may not be the best option because Pycharm supports only a few languages. For example, C/C++ is not supported in Pycharm. In that case, Atom will be the best option for you.

previousCannot Use Import Statement Outside a Module | Fix
nextFloating Ads: How They Work And Why You Should Use Them?